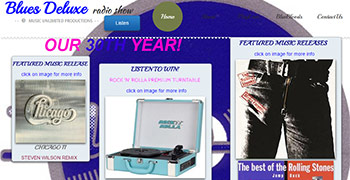 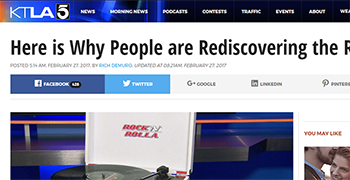 In a world of satellite and Spotify, here is why people are still discovering an age-old format called the record.

Read the full story from KTLA 5. 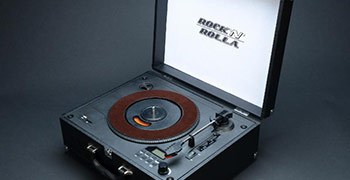 Rock ‘N’ Rolla, the ultimate in Portable Briefcase Turntables, will be featured on the 59TH ANNUAL GRAMMY AWARDS® pre-party show on CBS’ Daytime Emmy™ Award-Winning talk show THE TALK on February 9, 2017 (broadcast weekdays 2:00-3:00 PM, ET; 1:00-2:00 PM, PT). Members of the popular show’s studio audience will each take home a gift of Rock ‘N’ Rolla’s top of the line XL model, which, in addition to playing vinyl albums, contains a hidden CD player beneath the turntable. In addition, THE TALK‘s viewers will be invited to participate in an online contest for a Rock ‘N’ Rolla XL unit.

The timing for the unveiling last fall of the Rock ‘N’ Rolla product line could not be more ideal, with sales of vinyl recordings currently at a 28 year high and growing by 10% each year in the U.S. Vinyl sales eclipsed digital downloads in Great Britain in 2016. These eye-catching, attractively-priced portable record players, which were rolled out for the holiday selling season, have quickly become “vinyl’s new best friend.” Goldmine Magazine, the journal for record collectors, had this to say: “This turntable transports you back to the ’60s with its retro look, sound and build quality. Not only do they [vinyl records] sound exactly like they ought to, they’re being played on much the same kind of turntable they were made for,” while The Dallas Morning News said: “This is the coolest suitcase you’ll ever own.”

Rock ‘N’ Rolla turntables are also available on Amazon and other retailers. 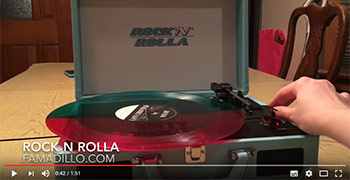 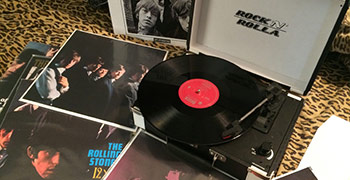 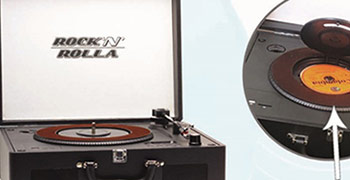 Rock ‘N’ Rolla™, the ultimate in Portable Briefcase Turntables, will be available from retailers and online outlets beginning in early October. With sales of vinyl recordings currently at a 28 year high according to Fortune Magazine, eye-catching, attractively-priced portable record players will be appealing gift items for the holiday season.

Read more on this story here 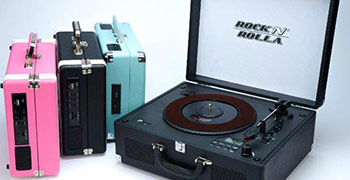